Hi everyone, my name is Georgia and I have recently joined the team here at INTERNeX New Zealand. I’m a university student in my second year studying for a Bachelor of Commerce and Bachelor of Health Science conjoint degree. I’ll be working with admin and social media and keeping everyone up to date with upcoming events and highlights of the week. I love travelling and learning about new cultures and I hope to share with you some exciting things to do here in New Zealand!

Things to do in Auckland:

Where: The Cloud, Auckland Waterfront.

Valerie Adams will be presented her Olympic Gold Medal by the Governor General of New Zealand next Wednesday. There will be a performance from the winner of the Olympic songwriting competition as well as a fireworks display! Other New Zealand Gold medalists will join Valerie, including Mahe Drysdale (Rowing)

Tickets to this event are limited, if you listen out to one of these radio stations- ZM, Flava, Radio Hauraki and Classic Hits- you might be able to win some tickets, or you can visit the ANZ Facebook page to enter. If you aren’t able to get a free ticket you can still go to the waterfront to watch the fireworks display, which is said to be one of the largest ever in NZ!!

What: The Auckland Heritage Festival

Where: All around Auckland.

The Auckland Heritage Festival being held from 29/09/2012 to 14//10/2010 Is a great opportunity to celebrate Auckland’s Heritage and learn more about the city by participating in some cool free activities such as tours of historic sites, concerts, walks, film screenings and much more. To find out more visit the Auckland City Council website.

What: Investec Rugby Championship All Blacks vs South Africa.

This Saturday the All Blacks are playing South Africa in the Investec Rugby Championship. The game will be played in the new Forsyth Barr Stadium in Dunedin. Head down to a local pub to watch the All Blacks take on (and beat 😉 ) South Africa- 7.35pm.

Other things to check out…

A new Milk and Cookie bar called Moustache has just opened on Wellesley Street behind the civic.  Check it out this weekend and try some of NZ’s best homemade cookie and milkshakes all made with local ingredients.

There is a NZ Geographic Photographer of the Year exhibition on at Auckland Museum from the first of September right through to the 3rd of February 2013. This exhibition has a great display of some of New Zealand’s best photography.

Have a great weekend! Georgia

It has been quite a long time I did not post on the blog, but I won’t wait one more month for the next one I promise.

I hope you all are enjoying the end of the summer, even if the weather in that summer itself was not really great, that’s the least we can say.

As some of you may know I’m passionate about rugby and I’m now playing for the Eden R.F.C Club, near Eden Park, and this weekend was the last “friendly game” before competition kicks off next weekend. So we headed to Takapuna to take on our neighbours from the North Shore and unfortunately… we lost. You may have heard that the Super Rugby season is on, tickets are cheap, entertainment guaranteed : I really encourage you to go watch a game at Eden Park, and don’t be afraid to go alone, the supporters group, the Blue Army is always welcoming everyone in the Lower East Stand of the stadium.

On Sunday there was an International Culture Festival at the Mt. Roskill War Memorial Park, and even if I was not there my flatmates were and they told me that it was rather awesome for the food, especially if you were nostalgic about the German or French specialities…

I’ll keep you updated about the next events happening in Auckland, and from there if you have a picture that you want to share, don’t hesitate to send it to us to be the Picture of the Week, at pr@internexnewzealand.com

Hi everyone the Picture of this week features the first game of the Super XV in rugby this season which occurred two weeks ago and I was there to see the Auckland Blues lose against the Canterbury Crusaders with a dramatic final. 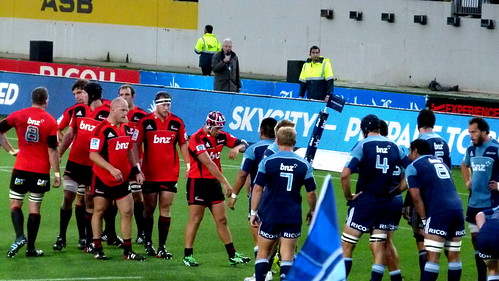 If you don’t know anything about rugby, what you can see on the picture is a phase of the game called scrum.

Hi everyone, I hope you had a great weekend. Mine was not particularly busy but on Sunday I went to Orakei Domain where I met the Auckland Blues team as they were playing with kids for a little session to meet the fans. I could get some good pictures with All Blacks and had some stuff signed by them.

Chris went to Splore 2012 where apparently he had a great time, camping and going to the concerts.

I hope your weekend was busy but in a good way !

Hi everyone, here is the first article of the weekly series of « Casual Friday » where you will have the smell of the weekend coming.

So for the first article, I’m going to write about what is my passion and what coincides with the actuality : Rugby !

You may have heard or seen it but next week is the return of the Super 15 which is the second-best rugby championship in the world (people here will tell you it is the best, but in France we pride ourselves to think ours is the best…). Anyway you can’t miss that, even more if you missed the World Cup…

The Super 15 is the combination of 15 teams from 3 countries (South Africa, Australia and New Zealand, 5 teams for every country), and the local representatives are the Auckland Blues.

So with tickets going from 20$ it is the perfect occasion to discover and understand live the complicated rules of the best sport in the whole world (ok I may be over-enthusiast but trust me, it is an awesome sport…) !

The first game of the season is gonna be next Friday at 7 :30PM at Eden Park and is surely going to be one of the best games of the season with the Blues battling against the Canterbury Crusaders, their biggest rivals. Basically, half of the All Blacks team is going to be on the pitch and as the stadium will not be over-crowded, you have great chances to approach the players at the end of the game !

Here is the link to buy a ticket : http://www.ticketmaster.co.nz/Blues-tickets/artist/1090488?tm_link=tm_sports_f1

Have a great weekend, Robin.

As you may have noticed no Pub Night has been organised for a long, so I can announce you that the next one will be on this Friday night (the 30th) and will be held firstly at Rakino’s on Freyberg Place, then we will head at the Shakespeare on Albert St. where we can watch the game between South Africa and Samoa (big and tough game), no worry if you don’t know the rules I will be at your disposal to explain them to you, and if you are simply not interested in rugby, you can still have good beers and a chat with others.

This will be the first time for many of you that you see me and it’s gonna be great for me to meet you too. I won’t be the only new face as I will be joined by a new intern, Lotte, from Thursday in the PR team. You’ll know shortly more about her on this blog, or when you meet her at the Pub Night. Whether you just arrived in New Zealand or you are here for months, it’s always good to socialize around a few drinks, so I hope to see you on Friday at 7:00PM on the Freyberg place in front of the Rakino’s.

the Picture of the week is found! It shows the Beach of Motuihe Island. Robert choosed it because it impresses him all the time.

Fair enough, I think. But look at it and make your own decision…

As prize, Robert won two tickets for the Rugbygame on Friday, where he can see the Blues vs. Highlanders. Hope you really enjoy the great Kiwievent Robert!

And I am really excited to see your pitures. Send your funny, weird or just beautiful picture of your time in New Zealand to pr@internexnewzealand.com.

After making Robert a lucky winner the 7th Pubnight went on with some really nice chats and drinks at the usual bars, because we had another fellows last Pubnight…so we visited all the typical places where we had been the past Pubnights.

And I was really lucky to see some new faces at the Pubnight yesterday…that makes it always so interesting…so please don’t hesitate to bring your friends.

We finished the evening at Danny Doolans with some really tasty drinks, a great atmosphere and LIVE MUSIK! I will try to find more of it in this city…;-)

Thanks to all attending yesterday and especially for the new travel ideas…;-)

Have a nice start in the weekend!

Have you seen the amazing picture of Marie-Coralie last week? Maybe you have a similar one that could be the winning photo for some Rugby tickets. So heres the new chance for you. Send us your favourite picture of New Zealand until Wednesday, 15th of June next week and hopefully you are the next lucky person enjoying a typical Kiwi evening at the Eden Park.

So have a look through your pictures and send the best to pr@internexnewzealand.com!

Good Luck and have a nice week!

But one after another!

We started the Thursday night in the Rakinos, where we became a group of about 10. We could congratulate two of them:

INTERNeX intern Robert spent his birthday at the PuB Night. Congratulation and all the best for your time here in Auckland again, Robert!

And as we pronounced you, we also handed over the prize for the winner of the Picture of the week.

This week Marie-Coralie was the lucky winner, because she sent us a really funny picture from her workplace. She must have a really hard job..;-) Look at the picture and you will see, what I mean…

This hard work has to be rewarded. So Marie-Coralie can enjoy the Rugby game. Congratulation again!

So the 6th PuB Night was characterised by a lot of fun and a little bit of sadness because it was Pauls last PuB Night. But even the Pubs were really quite we eventually ended up in the Cassette Number Nine, where we danced until we coudn’t stand anymore and drank shots out of little cans.

So I think the last PuB Night became one of the best and turned into an unforgettable evening for Paul.

Thank you Paul for establishing the INTERNeX New Zealand PuB Night and you guys for joining it many times! Hope to have some more of them…;-)

Picture of the week!

Thanks and goodbye to Carolin…

Our picture of this week is from and with Carolin – a participant of the INTERNeX Hospitality program – who left the country on Monday. The picture is made at the Rotorua Lake and shows Carolin, how she says goodbye to a great time in New Zealand.

We would like to thank her for participating in the program and being a good friend to many people her. We are looking forward to meet her again some day. Have a good time in Fiji and Los Angeles Carolin!

So guys, for sure Carolin can’t go to the Rugbygame because she isn’t in New Zealand anymore. Sad for her but another chance for you to get the tickets for the Rugby game next Saturday.

So look through your pictures and send us you favorite for the next “Picture of the week” until Thursday, 2nd of June and luckily you can enjoy a real Kiwi-Saturday evening.