Hi everyone,
I hope you are well wherever you are in the country,
We have just been told by our favourite surf company, MOJO, that they have a really good special on their 5 and 7 day learn to surf trips in March
This trip include transfers from Auckland to Opoutere, (a really beautiful white sand beach on the Coromandel), then to Raglan, one of the most famous surf spots in the world with its black sand beach, and then back to Auckland as well as very cool dorm accommodation (I have been to both spots and they are great!),  a local tour and surf guide, at least one 2 hour surf lesson per day (5 for the 5 days trip and 10 for the 7 days trip) the equipment (surfboard and wetsuit), and of course the company of other young like minded people from around the world.
Normally the 5 days trip is at 645NZ$ and the 7 days trip at 845NZ$   but with this deal, if you book and starts your trip before the end of March you get 150NZ$ off, making it at respectively at 495NZ$ and 695NZ$ and moreover if you book with INTERNeX we are going to give you 5% of this making the total cost $470 and $660. The Mojo mini coach leaves Auckland every Monday and brings you back on Friday or Sunday depending on your trip.
For the meals, at the beginning of the trip everyone on the bus pays a $100 food kitty and you go to the supermarket where the meals including breakfast, lunch and dinner are purchased for the whole trip. If you have special meal requests these are taken care of at this time.
So even if you never surfed before or you are already really good I can highly recommend this trip as it is really heaps of fun and a real taste of New Zealand.  My favourite part is Karioi Lodge where you stay in Raglan is amazing, set in the bush in the heights of Raglan with a sauna and a scenic point to relax in the evening… I can tell you all of that because I have been on this trip myself thanks to Chris who sent me on a famil trip last November.
The picture below was taken in Opoutere. 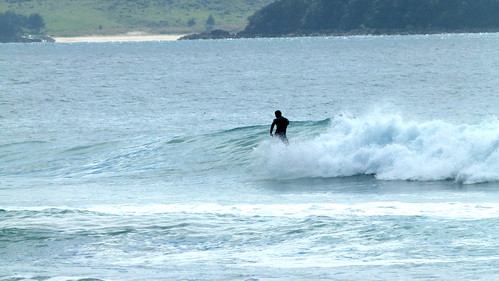 If you are interested, call us, email us or even visit us at the office !
Cheers, Robin

This picture has been taken in Opoutere just before surfing. I love the idea of imagining the dog on a board, taking the wave, and well I’m sure he would have done better than me…

If you have pictures you want to share to everyone, don’t hesitate to send them to us at the address pr@internexnewzealand.com. 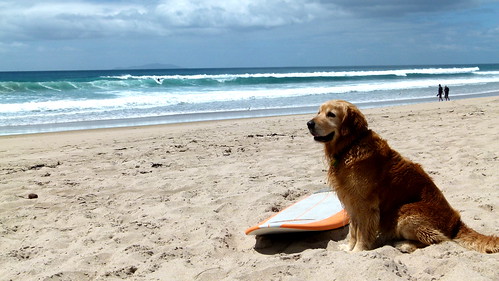 As some of you may know, we are back from a trip to Opoutere on the East Coast and Raglan on the West Coast where we have been surfing and enjoying the sun… well almost.

We left Friday at 4:00PM in front of the Stray office on Fort St. for a three hours journey to Opoutere. On the road you could clearly see the rural side of New Zealand, far from the buzzing of Auckland. 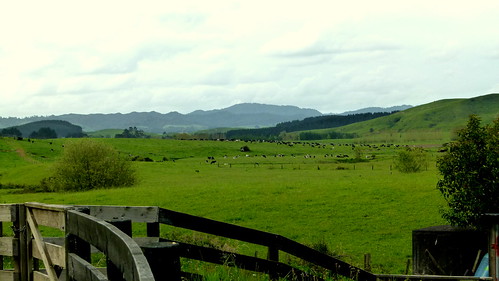 We arrived just before the sunset in the Opoutere YHA which is a really great backpackers hostel, for the view first, (on a protected bay with the ocean a bit further) but also for the features with table-tennis, volley-ball, free kayaks… 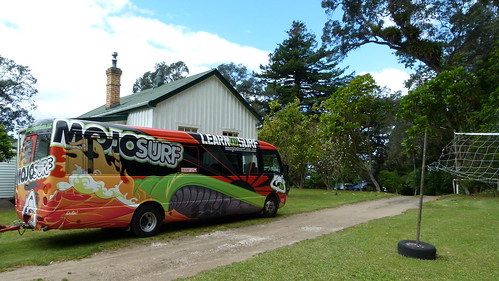 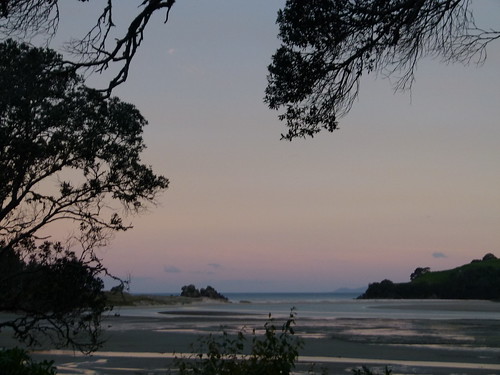 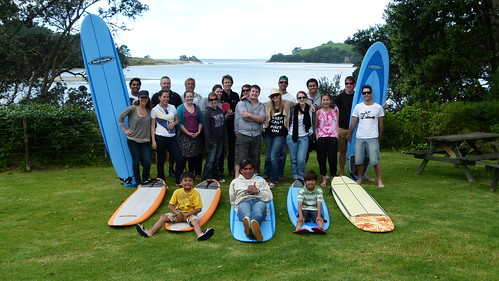 The morning after we took some time to unpack the new surfboards arrived earlier at the hostel and we took the mini-coach to get into the action. 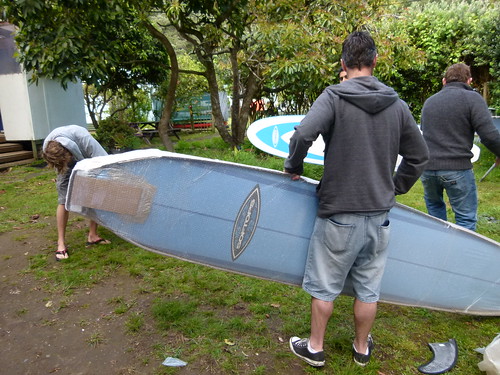 Arrived on the car park, and after a 10 minutes walk in a little pine forest, we arrived on the beach. A long white sand beach surrounded by a forested reserve and a sand spit which is a breeding ground for several endangered species of sea birds like the “New Zealand Dotterel”. 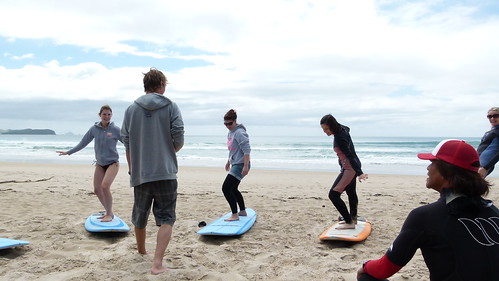 After the basics safety instructions given by our two Raglan-born instructors, Hemy and Ryan, we jumped into a quite warm water and took the first waves. Not easy to stand-up but most of us reached it finally after several times. Quite exhausting to battle against the current but the feel of the wave pushing you is really awesome. 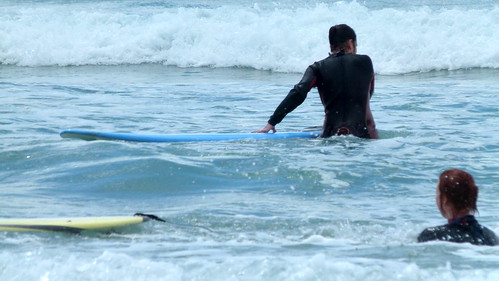 Another three hours journey and we arrive in Raglan to take the boat and have a scenic view of the harbour with the typical Pancake rocks. 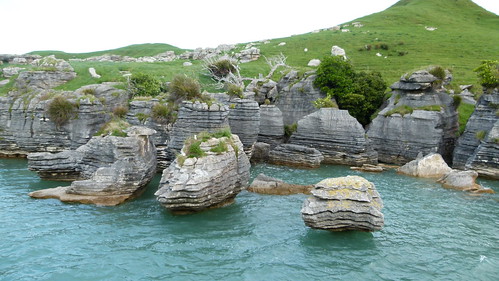 10 minute drive we arrived in Karioi Lodge, a backpackers hostel lost in the middle of the bush in Raglan heights. We arrived a bit too late to see the sunset this time but the next morning the sight was still pretty amazing even more from Inspiration point, a panorama point at just 5 minutes walking from the lodge where some come do their yoga on a wooden deck. 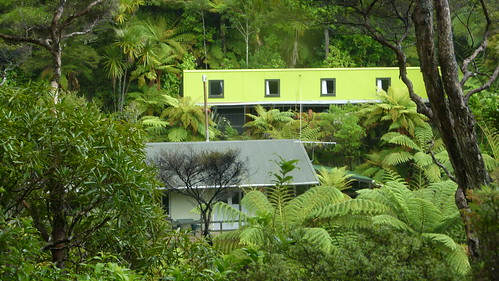 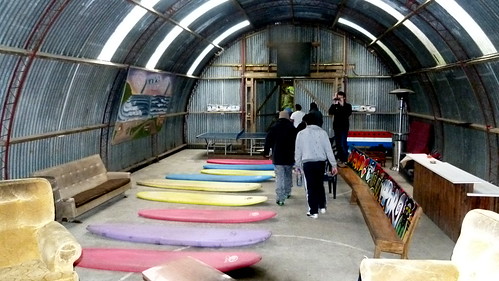 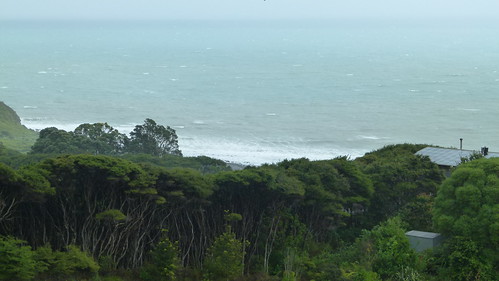 Then we took the mini-coach to go to the beach (this time a black sand beach due to the volcanic activity of the region) and take our second lesson where we could realize that everybody has already improved from yesterday. The rain took part in the game but as we were already wet, well it did not really have an impact on the fun…

It was already the end of our stay in Raglan and we had to head back to Auckland, hopefully we had a stop in a wonderful and accessible place Bridal Veil Falls, 55m high. 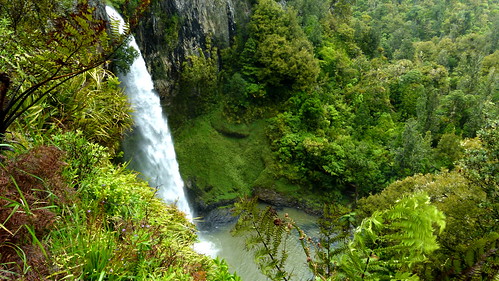 Thanks a lot to all the MOJO Surf crew for this awesome weekend, and even if I still can’t say that Keanu Reeves is an amateur, we had a lot of fun !

Summer is back and even if those last two days have been rainy, it’s already the return of the surfing season !

And surfing in New Zealand is definitely a must-do. Apart from telling to your friends and family that Keanu Reeves in Point Break is now an amateur compared to you it’s a super experience that everybody enjoyed last year, in one of the best spots of New Zealand : Raglan. 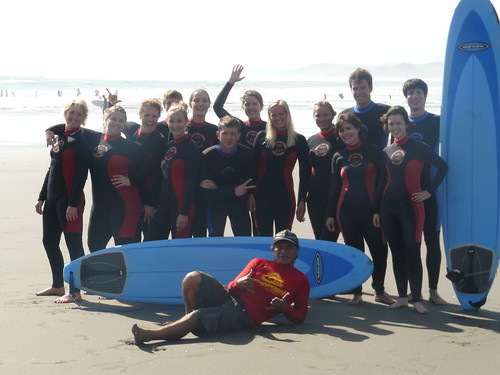 Usually at 299$, the price dropped to 289$ for a student special price, including : the transfer to Raglan and back to Auckland, one night accommodation in a dorm share, a BBQ dinner, a continental breakfast, and of course the surf lessons with the wetsuit and the board hire.

As there are currently quite a lot of interns in Auckland, we would like to try to have you altogether on this surf weekend. So let us know if you would like to take the wave and if the weekend of the 19th of November suits you. Of course you can do the surftrip any other weekend as well and you’ll meet lots of great people on the bus anyway.

Most of you have never surfed, me included, and so don’t worry to be apart,  and even if you are not going into 4 meters high water tubes, you can still expect to have really good sensations.

If you want more infos, don’t hesitate to drop us a mail at pr@internexnewzealand.com.

P.S : I think you have heard about the oil slick that is happening right now off Tauranga coasts and which is really a huge environmental disaster for the country, with no doubt the worst in its history. Raglan is not concerned by it so no problem for the surf weekend, but if you want to help I will keep you informed soon on this blog and on facebook for the volunteer options.